Hello guys! We will be starting an art series, and this series would be all about promoting unique artworks that speak to the ills of society. First is Pulchritude. Art is beautiful, and we at Talku Talku, would be showing you the beauty of art. Our creative showcase for today is Pulchritude. Pulchritude is an artwork by Janet Adebayo Adenike.

She is a graduate of the Federal Polytechnic Ilaro, Ogun State, Nigeria. Her artworks take a critical view of human problems and cultural issues. She’s currently painting a camouflage pattern as her style. She just currently evolved to using that style of art. Humans face major problems like insecurity, race, police brutality, gender inequality, and emotional distress. Her artworks are a way of addressing societal ills. We will be looking at a couple of Janet’s works for the next couple of weeks. Here’s one of her artworks:

Janet, tell us about this piece of art Pulchritude.

I captioned this piece “Pulchritude”. But I named her Juliet. I made her hair out of waste. I used the waste mostly seen in boxes that are used to package and cushion electronic gadgets. I’m big on protecting the ecosystem so I try to use waste products for my art and I intend to keep doing that.

What’s the inspiration behind Juliet?

This work explains that the irresistible pulchritude of a woman should not make them vulnerable to sexual violence such as rape, sexual harassment, molestation, and the like. Yes, she is beautiful and imperfect but should that make her vulnerable to rape? No, it shouldn’t be. Her eyes may be dazzling but her hair should remind you of the pathetic story of Medusa. This is the second edition of Pulchritude.

What was your thought process like during the creation of Pulchritude?

I realised that I have the ability to relate to life’s pressing issues. Whether one I got from my personal experiences or from other people’s experiences. 2018, 2019, and 2020 were the years I experienced life’s provocative situations. I heard depressing stories concerning the female gender and I became a private advocate. I decided to use my art and craft to address issues concerning humanity.

The story of Medusa, which is found in Greek mythology, inspired my art, Juliet. So many families are broken because women were used as objects and they decided to get married because they thought marriage would solve the problem and heal their pain. But that isn’t true. Depression sets in when the culture tells you to shut up. Why was Medusa turned into someone evil even after knowing the truth? Well, Juliet’s hair remains beautiful to me. Her hair isn’t venomous. I made it snow white and that represents purity instead of the evil stereotype people have of her.

Moyo is a linguist who loves writing and uses her platform to encourage others to stay active and positive with their health, food and wellness tips.
All Posts »

Augustyn does Rap: Polish creative who raps about healthy living is preparing the ultimate guide to living right in 2021 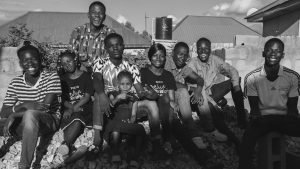 Nigerian filmmaker collective, The Critics Company, are gearing up for an amazing 2021

Listen to our Podcast

Begging Question: Would you break up with your partner if you found out they had a medical condition?

Begging Question: Would you break up with your partner if you found out they had a medical condition?

The Sit Down: Meet Augustyn, a Polish creative, who raps about healthy living

The Sit Down: Meet Augustyn, a Polish creative, who raps about healthy living