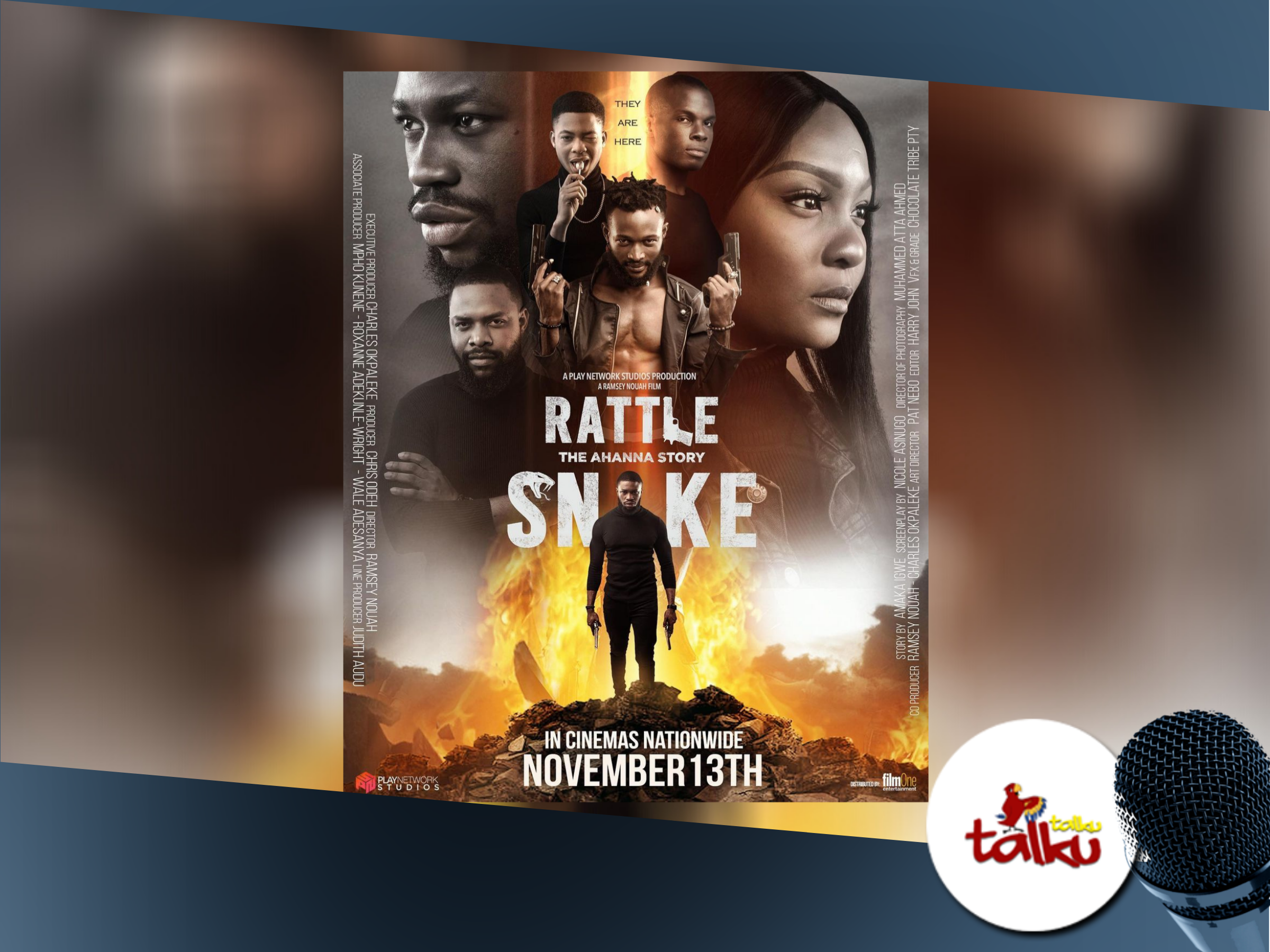 It’s a great day for another late review!When the hype around movies has died down is my favourite time to look at a movie for the sake of reviewing it. I like doing things this way because all the reviews, opinions, and possible influences would have ceased, allowing me to see the movie like I was seeing it again for the first time.Warning: Spoilers ahead (but why haven’t you seen Rattlesnake: The Ahanna Story by now? Ehn?)

You should know by now that Rattlesnake: The Ahanna Story is a remake of the Amaka Igwe 1995 classic, Rattlesnake.Amaka Igwe’s original is a culture-backed movie that tells the story of a young man, Ahanna, who takes to a life of crime after his father dies suspiciously and his uncle starts to maltreat him.If you ever saw the original, the idea of a remake may have pissed you off. We know how remakes usually struggle to live up to the expectation of the original, especially if the original is considered cinematic gold.However, Charles Okpaleke, CEO of Play Network Studios, has decided that this is the hill he wants to die on. And following the success of the remake/sequel of Living in Bondage (Living in Bondage: Breaking Free), we agree that he’s capable of doing a good job of it.Just like with Living in Bondage: Breaking Free, Play Network and Ramsey Nouah (director of both films) chose to make an entirely new film loosely based on the original story.The biggest difference is the language which Rattlesnake is in – Igbo. Rattlesnake is filmed in English with a sprinkle of Igbo here and there.Another difference is the addition of Amara as the Armadas’ thirst trap (every heist gang usually has one) in the 2020 remake. Amara was an important side character who wasn’t involved directly with the gang.Rattlesnake: The Ahanna Story is a movie with a grand show of opulence and class that makes you want to live in the world first created by Amaka Igwe and recreated by Ramsey Nouah.Stan Nze stars as the titular character Ahanna. Bucci Franklin plays Nze, Ahanna’s childhood best friend while Osas Ighodaro plays Amara, Nze’s sister who falls in love with Ahanna.Emeka Nwagbaraocha plays the teenage computer “genius” of the gang, Sango, while Odera Adimorah plays the gang’s weapons master Egbe.Efa Iwara plays Bala, who joined the gang on Ahanna’s behest after helping him when he first got to Lagos.The Armadas of Rattlesnake: The Ahanna Story are the typical movie gang. You’ve got the brains who’s also the boss (Ahanna), the volatile one (Nze), the weapons guy (Egbe), the guy in the van (Sango), the loyal one (Bala).

Again, let’s look at the premise of both movies to see the difference.In the Amaka Igwe classic, a life of poverty brought about by the suspicious death of Ahanna’s father pushed him to start a robbery gang, The Armadas.In the Ramsey Nouah remake, Ahanna loses his father and becomes depressed. His mother moves on, leaving him with his grandma.After looking for a job for several years after his graduation from the university, he decides to come to Lagos to look for his mother and uncle.He locates his mother and finds her married to his uncle, with a brand new family. He leaves, dejected, and sets out to locate Nze, his childhood friend.He locates Nze and Amara, and finds them in dire straits – they’re deep in debt, and their creditor is the top henchman of the country’s top crime boss.He decides to help them get out of it by robbing his mother and uncle, where he discovers that they cheated him out of his inheritance and that they both killed his father for his money.Then he decides to assemble a gang to rob his way to the life he’s always wanted, making enemies of the police and the country’s top crime boss on the way.Both stories are totally different from each other. It’s safe to say that Rattlesnake: The Ahanna Story is a totally different film that just shares the same name and title with Amaka Igwe’s film.

Like we stated earlier, remakes have a tendency of underwhelming, especially if the original is considered cinematic gold.However, if you watch Rattlesnake: The Ahanna Story as a totally new film, it’s a film you’re going to give good ratings. Above 50% at least. As a remake compared to the original story, meh.In the 2020 remake’s defence, the original Amaka Igwe classic had three solid parts totalling seven hours. There’s no way they could fit in the depth, character development, and cultural nuances that made Amaka Igwe’s classic endearing into two hours.The story itself has a basis that’s very relatable. Ahanna’s thought process is prevalent in today’s society. Many believe that the only way to actually escape trouble is to be rich and famous. The execution, however, is what’s confusing.First, Ahanna loses empathy and decides to rob. Then he forms his gang with an empathetic rule (no violence), while also being modern Robin Hoods. Then when things go awry, he loses his empathy for the people you expect him to have the most empathy towards – his gang.It doesn’t give a clear identity to Ahanna, neither does it give The Armadas any clear identity. Are they a gang of robbers who just want to take it all? Are they an anti-hero gang? Unfortunately, we can’t tell. I can’t tell.But the really annoying bit was the ads that filled the movie.This thing has become a staple in Nollywood movies and it makes me roll my eyes every time. What happened to listing the sponsors in the credits? Why does Nollywood do this thing?Another annoying thing is how much opulence the movie displayed.Charles Okpaleke, CEO Play Network Studios said that his films will show class and opulence as that’s what his brand represents. We understand. However, when these things are made centre stage of the film, taking more screen time than the actual story, then there’s a problem. Despite its failings in plot execution, Rattlesnake: The Ahanna Story has great acting. The way this makes me so happy, ehn. Nollywood movies have a problem with the acting. The actors are either over-acting or under-acting. Ramsey Nouah’s movie had none of that mess.Well, except Ayo Makun, who I think makes really great movies but should be behind the camera more than he’s in front of it. Also, Ramsey Nouah seems to have an idea of building a shared universe with these remakes. It’s going to be cool to see if he continues directing movies for Play Network Studios.The movie was a tad confusing despite having a solid premise which I really enjoyed.

The remake curse strikes again. There’s no beating this hex just yet, especially in Nollywood that’s just exploring its limits.However, as a totally new story, Rattlesnake has a re-watch value. I could go back to the cinemas to see it again (if it was still up and I had absolutely nothing to do and no other movies to see) and would still enjoy it as I did the first one. But if you want to watch it with hopes of seeing Amaka Igwe’s epic story given new life, please just save yourself the stress and find something else to watch.