Eli the Great and Cvilizedvillagrr created the most iconic representation of 2020's #EndSARS protests. I catch up with them to learn the story behind it. 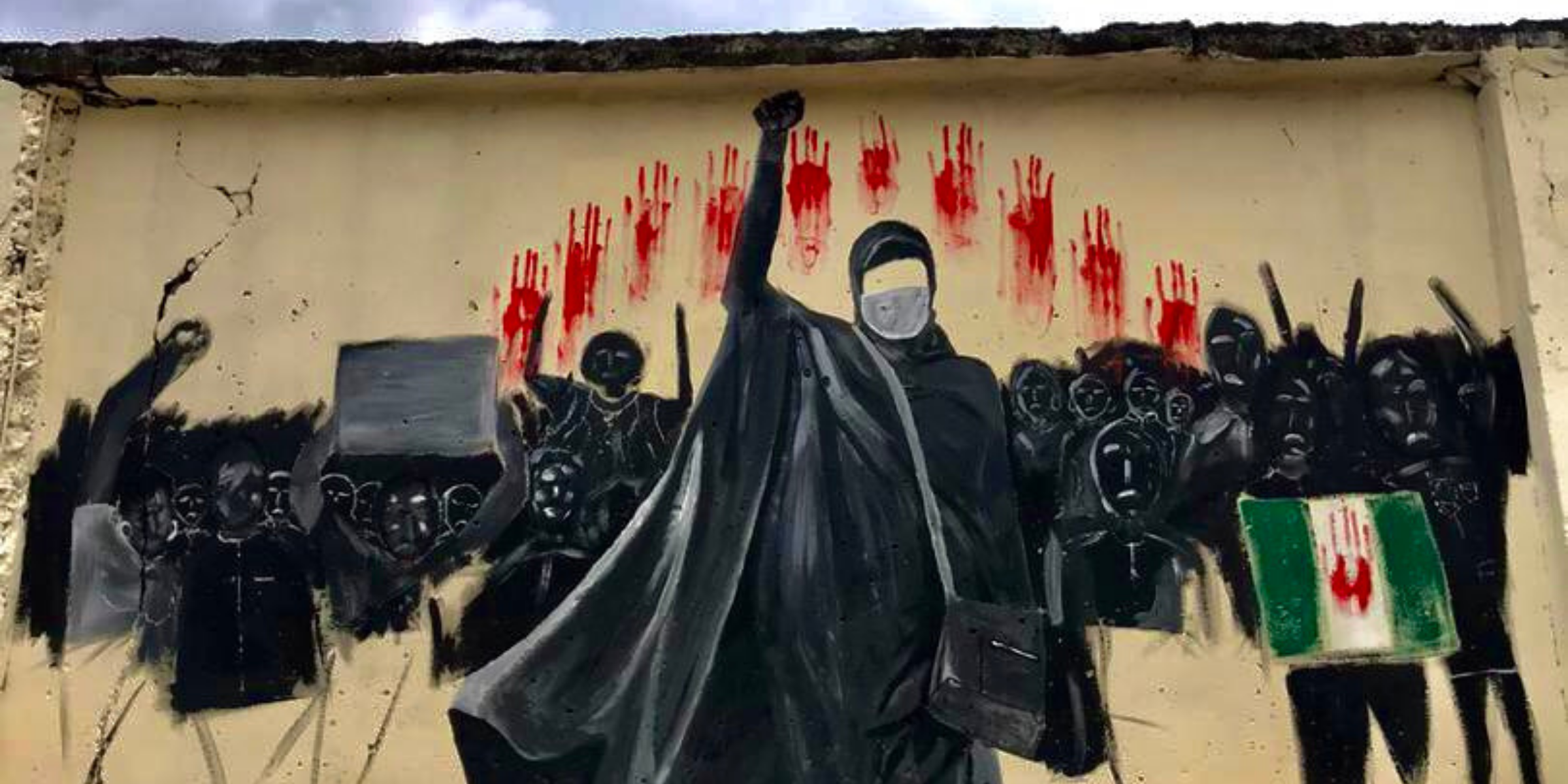 The #EndSARS protests are still fresh in our memories because of the passion behind it, as well as the brutal way it was brought to an end. It truly was a fight for the soul of our nation, and it was championed in no small way by creatives who are some of the primary targets of the police brutality that was protested during the #EndSARS movement. Many creatives stood out, but not many did as much as Eli the Great and Cvilizedvillagrr (pronounced ‘Civilised Villager’), two young visual artists who painted the most iconic mural representing the protests.

Eli the Great and Cvilizedvillagrr are Lagos-based career creatives who make art to inspire happiness and give life to dull spaces. They, like many other Nigerian young creatives, have been wrongly profiled and have had to deal with police harassment. And they, also like many other Nigerian youths, were very vocal in the #EndSARS protests until the happenings at Lekki on October 20, 2020, shut the protests down.

Nigerians tried to recover from the aftermath of the Lekki shootings but didn’t let it just end there. After being bullied off the streets, many youths reorganised themselves in various locations across the country. Youths picked up voter educations and created platforms to carry that project out. Youths went from door-to-door to educate people on the essence of the protest. Youths went round to places of worship to share educative and informative fliers. As all these went on, Eli the Great and Cvilizedvillagrr got to work the way they know.

Eli the Great and Cvilizedvillagrr put heads together and decide to use their creativity to make sure that, whatever happens, the fire doesn’t just fizzle out the way it tends to happen in Nigeria. Both of them started a movement to paint memorial murals of the #EndSARS protests on walls across the country.

Their work, which, Cvilizedvillagrr says just ‘happened’, has garnered a lot of support on social media and continues to draw attention. The appreciation for Eli the Great’s and Cvilizedvillagrr’s efforts encouraged many Nigerians and continues to serve as a reminder of what happened and what can happen when we come together as a nation of creative people.

Both Eli the Great and Cvilizedvillagrr have worked together many times in the past. However, only Eli the Great saw himself doing work of this nature. “In an environment like ours, you don’t really have a choice, in my opinion,” Eli the Great replied when I asked them both if they saw themselves doing activism work. “I absolutely hate injustice. I was very much involved in the #EndSARS marches even before the [idea for] murals came up, lending my voice and also my hands where I could, making flags and all that.”

Cvilizedvillagrr said: “Honestly, I didn’t [see myself doing activism work]. But somehow I started growing; I started being conscious about my environs so that led to understanding how to use my voice in the streets. It [the mural] just happened, you know. We had walls to create contents for and there was a curfew. This was just our collaborative idea of how to keep the campaign rolling.”

Read Also: The Goth Parrot, Emmanuel Inok, takes us through his journey as an Illustrator and 2D Animator

Eli the Great added: “We linked up along with two other friends to assist and we got it done. None of this was pre-planned. Friends and family had reservations about us being outside but who cares, man? Na artists we be, we no dey thief, so why should I be scared?” Eli the Great also praised his frequent collaborator. “Working with Cvilizedvillagrr helps bring out your genius and that’s how we came about it. When you have a clear understanding of the situation, your hand and the walls do the communication.”

Both Eli the Great and Cvilizedvillagrr want these murals to speak to the next generation of kids. To do this, they require lots of support to keep the momentum going. “Patronise us, share our art, and tell your friends to tell their friends about us,” Eli the Great says. “And please just keep supporting the movement,” Civilizedvillagrr added.

Here are some progress shots of the mural, as seen in its full glory on the header image.

Eli the Great (real name Elaebi Amaremo) is a visual artist, photographer, and designer based in Lagos, Nigeria. He expresses himself through monochrome paintings and photography especially. A graduate of Industrial physics: Applied geophysics from Covenant University, Eli the Great made the switch to career artist in 2017.

Eli considers art as a way of life, a flawless mode of expression, and a manifestation of oneself. He and Cvilizedvillagrr are frequent collaborators. Check out his works on his social media pages: Twitter – @amaremoelaebi and Instagram @amaremoelaebi. Contact him to support or for commissions via his social media or via email – [email protected].

Cvilizedvillagrr is an artist and an art director based in Lagos, Nigeria. He expresses himself creating mostly on walls, canvases, digitally and via doodles. Art is a means of self-expression for him. He and Eli the Great are frequent collaborators. Follow, check out his works, and support him via his social media: Instagram @civilizedvillagrr; Twitter @cvlizedvillagrr