Eghosa Eboigbe: The man with the “God Voice”

Voiceover artistes are an awesome group of creatives, but they're sometimes overlooked. Eghosa Eboigbe is a voiceover artiste on a mission to change this narrative. 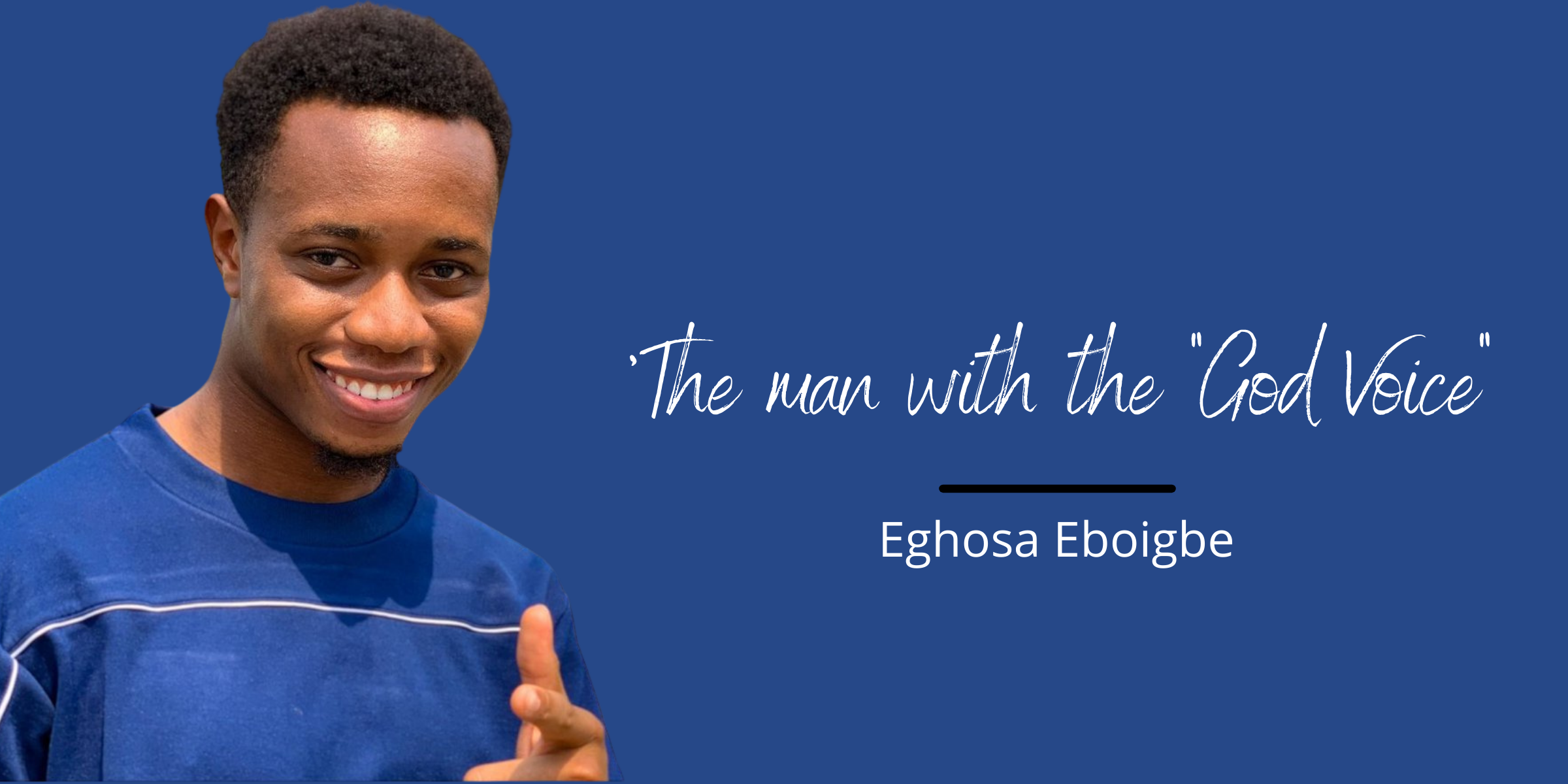 If you know these lyrics, you’re a real one. If you don’t recognise the lyrics, they’re some of the words from the chilling intro to one Michael Jackson’s biggest songs, “Thriller”, performed by the legendary late Vincent Price, one of the greatest voices in the 1950s to 1980s. If you appreciated that wonderful voice that conveyed such feeling, emotion, terror, and magic, you’ll love Eghosa Eboigbe, the young voiceover artiste with the “God Voice” who is our subject for today’s showcase.

Before we meet Eghosa, did you know that being a voiceover artiste can also be a full-time job? Voiceover artistes or actors or voicers like Eghosa Eboigbe are those people blessed with amazing voices who make digital media content such as animated films, television shows, documentaries, video games, and television/radio adverts come to life. Think about a really popular advert from your growing up, or now. Let’s use the epic advert from the defunct Bank PHB to illustrate:

Does this bring back memories? I’m sure, just like me, the smooth voice that said, “One day, cars will run on water” was what made this advert stick for you. This is how a voiceover artiste gives life to digital content. Eghosa Eboigbe is a man with a voice as deep, rich, and as amazing as anyone I’ve heard. Literally, this guy has a voice that can make you think God was talking to you if you couldn’t see the face talking.

“I eventually got tired of people trying to make me do one thing or another, so I decided to sit down and do some research and get to understand my voice more, so I would know what exactly I could or couldn’t do with it. That was how I came to find out about the voiceover industry.”

The voiceover industry became Eghosa’s escape from the expectations of people. But then he found out that his voice had serious potential and that he was very good at it, so he chose it as a full-time career. You would think that all the people who had opinions on what he should be doing with his amazing voice would support him from the get-go, but it didn’t exactly turn out that way for Eghosa Eboigbe.

“My family is still skeptical, especially because I’m a freelancer. But my friends, not so much,” Eghosa Eboigbe says about the support he has received from friends and family since venturing into the industry in 2018. “My dad keeps telling me to get a ‘real job’ because, according to him, ‘sooner or later, the gigs would dry up, and what would you do then?’ It’s [Eghosa’s father’s reason] a valid reason because, at some point in time, you may not see a gig for weeks or even months [as a voiceover artiste].

“There was a time when I didn’t get a gig for almost four months, then I got three in a week! That’s the life of a freelancer. So, it’s always good to have other options. That’s why I understand my parents. Also, as a voiceover artist, you could get a full-time job on radio or TV as a presenter, and a lot of other things you can do with your voice,” Eghosa Eboigbe added.

I asked him why he didn’t listen to them and just get a full-time job while doing voiceovers on the side. He made me understand that being a voiceover artiste is as tasking as any job can be, despite the many misconceptions around it. “First of all, don’t be deceived,” Eghosa Eboigbe said. “Some people would tell you that being a voiceover artist is an easy job because you’re just getting paid to talk.”

Eghosa Eboigbe then added with emphasis, “You may not be able to do that with a regular 9-5, except you’re employed as a voiceover artiste by a company.”

Eghosa Eboigbe studied Sociology – the science of people – for his first degree. This also helps him understand how to appeal to people through his voicing when he works on particular projects. But as he noted, the career life of a freelancer can be a tough one to live. Yet, he amps himself on the progress he has made, as well as the successes of his past jobs to keep going.

“I have to work, if not, I no go chop,” Eghosa Eboigbe said, laughing. “But really, I’ve got a lot that I want to achieve. I want to elevate myself, my family, and my friends, especially those who have stuck with me and always supported me. My family has always been supportive in their own way from day one. One thing that’s helped is the fact that my dad used to be a journalist and a reporter, so I learned a lot from him. Same with my mom and my sister. I owe them, big time,” he added.

But these are not just Eghosa’s motivations. He wants to be one of the best voiceover artistes that the world has seen. His aim is to become a household name, like the popular voice from EA Sports video games. “I want my voice to be omnipresent, and to be the standard. When people hear it, they’d automatically know who it is, just like anyone would know when it’s Morgan Freeman or Chris Hemsworth speaking,” Eghosa Eboigbe said.

“I also want to be super successful, enrich my life, the lives of everyone in my family, and those of my friends. Finally, I want to be influential, and use my influential voice to make people’s lives better, especially here in Nigeria,” he concluded. With Eghosa Eboigbe’s zeal and passion, I can tell there’s a renaissance on the horizons as to how voiceover artistes are seen.

We all love hearing them in our favourite media. It’s time we start supporting them more often. That friend with a unique voice can become just like Eghosa Eboigbe, or the wonderful man that made us dream in the Bank PHB advert. Follow Eghosa’s journey to voiceover artiste supremacy on his social media: Instagram @esemaria13; LinkedIn – Eghosa Eboigbe; Twitter @esemaria13.