Chinonso "The Revolutionary" Ihekire is a young journalist making a name for himself in the modern art scene. I chat with him about his journey. 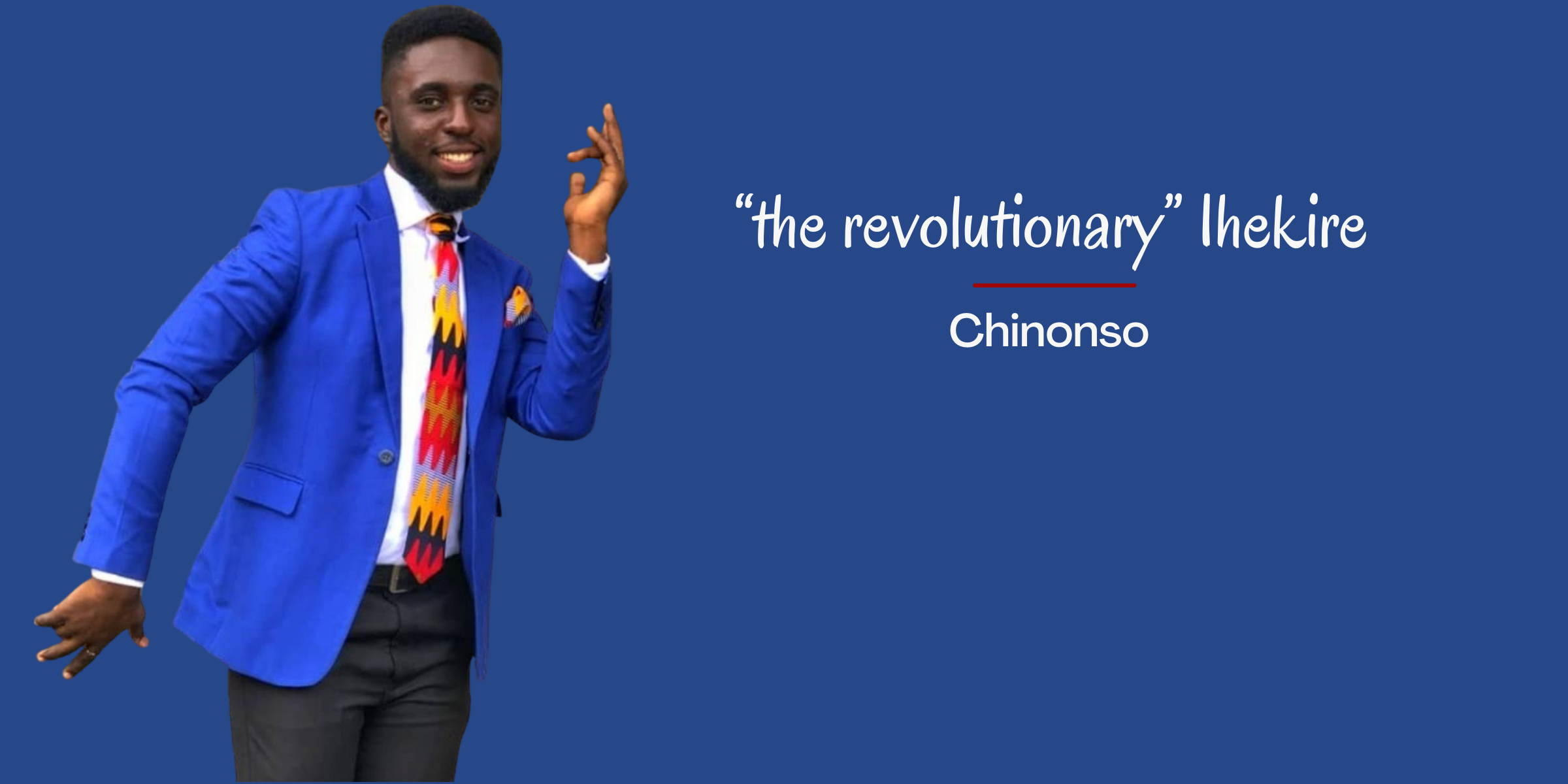 Chinonso Ihekire is a bird whose wings have already been noticed by birdwatchers like me. In his short career, Chinonso “The Revolutionary” Ihekire has done exploits that many creatives wish they have, and this is why I am doing you the honours of documenting his exploits in this piece.

Creativity really makes me so happy. That’s why I have chosen to be a professional famzer because these creatives need to be seen. The sky is big enough for all the birds to fly, and there’s no reason on this earth for any bird not to spread its wings. Okay. I’m leaving the bird analogy now, but I’m going to start telling you about this great dude, Chinonso Ihekire, whose work I really like and have been greatly impressed with.

Chinonso “the revolutionary” Ihekire is a journalist, creative director, writer, and filmmaker whose focus is on the liberal arts. He has quite the fancy – if I do say so – background, which fully encouraged him to pursue his passion for creativity without hassles. “From the age of nine, I started writing songs. I had a lot of friends for whom I wrote these songs of mine for. I had a great community of people who were like-minded so I pretty much knew that I was creative from a young age.

“Getting into the university, I explored a lot more with my writing: writing for photography, film, and many more. I was well exposed because I was able to put my feet in the right waters,” Chinonso says.

One thing I noticed about Chinonso Ihekire is how articulate he was. He had no issues answering my questions, and speaking about his many experiences. This is something that a lot of young up and coming creatives don’t have in their arsenal. Having talent is not enough. Having confidence is not enough. What you must have as the first weapon in your arsenal is the ability to sell yourself.

Read Also; Empowering women, one dress at a time. The story of ‘Kai Collective’

Chinonso Ihekire says that creativity comes naturally to him. He doesn’t have a fixed process as he can make up concepts as he goes. But what inspires him the most are those little things that make an impact in the life of an everyday person. This helps him to come up with all the concepts which he brings to life in his writing and his photojournalism. This is what I saw that made me go after this interesting character to pick his brains and see how he does his things.

We also got talking about how he has managed to keep doing this for as long as he has, despite the fact that the creative space is VERY HARD to navigate. Chinonso laughed. “As a creative, to survive in this very peculiar country of ours, you need the pope’s blessings, the angels’ blessings, added to God’s blessings to help you. So, you can’t rely on your creative talent alone, else you’ll just remain a creative who will spend himself or herself just creating without any benefit,” he said.

“So, a stream of income is necessary for you to keep creating. If you’re lucky, it’s your creativity that will be your stream of income. For me, I recognise that my ideas are valuable and are world-changing, and so I take my time to bring them to life. My unique selling point is the fact that I focus on creating socio-impactful work that is revolutionary in a world that is saturated with commercialised art,” he added.

“I’m also not looking to be the first person to do it. I want to put my own spin on already existing things and use them to impact all the lives I can. So, I know that I have to take time and not rush these ideas and while I incubate them, I do other things to keep body and soul together.”

Chinonso Ihekire looks up to the likes of Shakespeare, Leonardo Da Vinci, Michelangelo and many renaissance artists who have intriguing life timelines that we, several hundred years after, still cull inspiration from. He wants to have his own timeline that people can look upon several years in the future and relate to something revolutionary.

He has a lot of publications (including a running column with Guardian), some documentaries and short films, and many photography stories which he has conceptualised and executed. There’s a lot in his pipeline and he promises to share them with us as time goes on.

There’s a revolution coming. And Chinonso Ihekire is making his way to the front lines to fight alongside the champions who will deliver our world from mediocrity.