We are used to seeing these forms of art but when I stumbled on Abinoro Akporode Collins on Instagram, I was very fascinated by his works. The fact that he makes 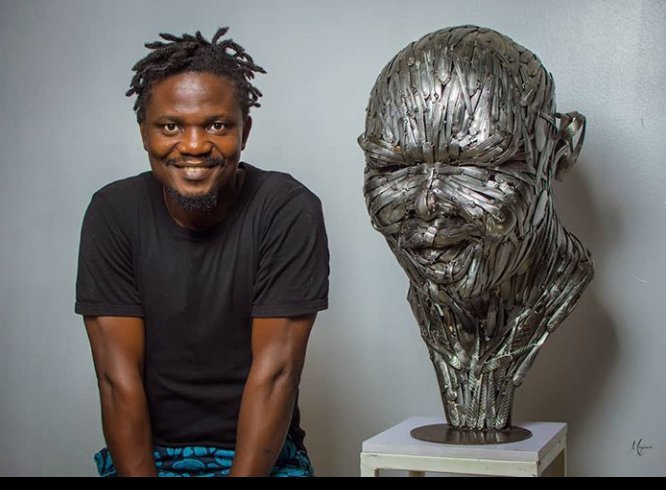 Art comes in different forms – words, paintings, photographs, and videos. We are used to seeing these forms of art but when I stumbled on Abinoro Akporode Collins on Instagram, I was very fascinated by his works. The fact that he makes sculptures with spoons and forks heightened my interest in getting to know who he is and how he does his works.

He is one of the few Nigerian artists who think out of the box. While the only thing that comes to your mind when you see cutleries is to use them to devour a meal, for Collins, it’s the next sculpture he will make.

From the little chat I had with Collins, I got to know that he graduated from the school of art and design where he majored in “Sculpture”.

He started using cutleries from a research course in school where they experimented with non-conventional mediums in sculpture. He used 13 dozens of cutleries to create his first cutlery piece – a cockerel. That piece was the beginning of his journey with cutlery sculpture.

When I asked how he was able to train himself to the point that he became so good at this, he said:

“The best professional training anyone can get is continuous practice. Allowing yourself to experiment regularly and never letting your falls stop you from your goal. Rather, use them as the basis for your growth. I am passionate about my work and I constantly strive for excellence”.

Seeing that a lot of people go to university to study professional courses like Law, Medicine, Engineering, and the like, I was a bit curious when Collins said he went to school to study “Sculpture”. That was not the norm and so I asked, “How was it starting out, seeing that this is a road less travelled?”

He chuckled as expected and replied:

“Art, for me, is not just a hobby; art is the only thing I have done all my life. It’s what I have put in 100% of my life doing. I treat it with a great level of passion and commitment. I wake up early daily as though I were going for a regular job in an office. I work at it as though I would be sacked if I failed at my task. I do constant research and experiments in my quest to be the best at my job. And the result has been rewarding”.

Okay, that part where he said, “I wake up early daily as though I were going for a regular job” made me feel guilty a bit. I mean I am an artist myself and I wake up whenever I like. But that’s just speaking on a lighter note.

As regards the challenges Collins has faced so far, he said he doesn’t think of the hurdles, not because he thinks they don’t exist but because he chose to pay less attention to them. In his words:

“For me, paying attention to the challenges rather than the goal is tantamount to preparing to fail. I deal with my challenge as they come and learn on the job”.

Collins is definitely a risk-taker, which is an admirable quality. On what his achievements have been so far, he was thankful for his growth. He moved to Lagos State, Nigeria after his service year and had no idea how the art market worked. He struggled to find studios to work in, as well as a source for the materials he used in his art. He had a hard time selling his works because they were expensive.

Oh well, I saw that coming. His works would definitely be expensive due to the materials he uses. Was Collins deterred by these challenges? Not at all!

In his words: “I was not discouraged by any of these challenges. I focused on my goal. I have never opted for any part-time job because of my earlier challenges. It was a tough journey that made me grow stronger and better”.

Again, curiosity led me to ask, “What is the process like, and how long does it take to complete one artwork?” He replied: “The most challenging part is first getting ideas and processing them into sketches. My work comes in different forms and applicable methods to create them. My bird piece requires an armature, after which cutleries are cut, using a metal-cutting machine. The design and quality of the cutleries are sorted out, then they are led bit by bit on the armature following the flow of the subject. Once the piece is ready, it is cleaned, burned, buffed, and installed on a base”.

Of course, every artist has a mentor or someone that inspires them. In Collins’s case, his mentors are Michelangelo, Auguste Rodin, Damien Hirst, and Jeff Koons.

Angelo’s “The anatomy studies” got him intrigued while Rodin’s textual feel was enchanting. Damien’s works challenged him to think out of the box and at the same time, Koon’s “Ballon Animal Sculptures” impacted his work in simple and powerful ways.

On the things he wished he knew before taking this path, Abinoro Akporode Collins said he has no regrets but he wished he was taught the business of art and how to start a career as a professional artist.